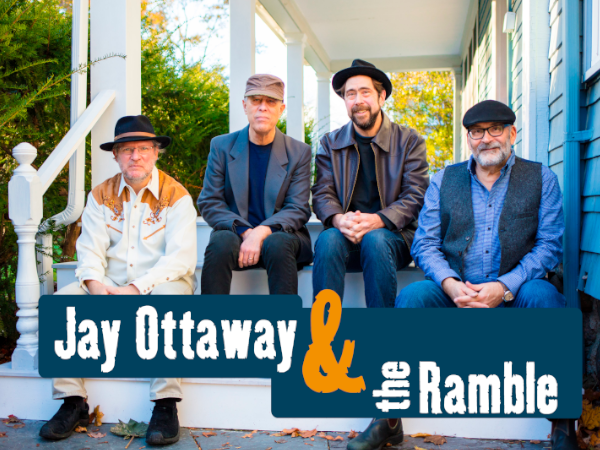 Jay Ottaway and the Ramble

Jay Ottaway is an award-winning songwriter/producer who has toured for decades throughout Europe with the Jay Ottaway Band. He has now teamed up with Dan Bowden, Greg Holt, and Ralph Rosen in the U.S. to form the acoustic-based, Jay Ottaway and the Ramble. The Boston band features original music combined with classics from rock legends such as Bob Dylan, Tom Petty and the Grateful Dead. In 2014 Jay Ottaway released his seventh studio CD entitled “Carry On”, with the German label Cactus Rock Records. Music critic Steve Braun of Rocktimes.de called it his white-hot contender for Album of the Year. This was followed by the 2016 release of “Jay Ottaway Band: Live in Europe,” and the studio double-album “Winter’s Journey” in 2017 and most recently his “Live in Bamberg” project in 2018. All these works have received rave reviews on both sides of the Atlantic. Lead guitarist Dan Bowden is a guitar professor at the Berklee College of Music, an online course developer, and an instructor for BerkleeMusic. Bassist Greg Holt is a teacher at the Boston Arts Academy and has collaborated with numerous organizations and musicians such as the Boston Pops, blues artist Sam McClane, jazz artist Kurt Elling, as well as folk artist Martin Sexton. Drummer Ralph Rosen is a Berklee staff member and also a harmonica master. He has played drums, percussion and harmonica throughout the world with some of the greatest Blues legends, including Bruce Katz.