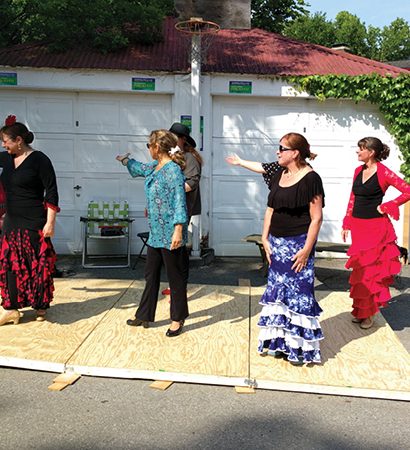 Wendy Caplan studied flamenco in Boston with Ramon de los Reyes, Clara Ramona, Omayra Amaya, Sabrina Aviles, Isaac de los Reyes and Yosi Karahashi among others. She studied briefly in Madrid and Seville. Wendy was the instructor for the Brookline Adult and Community Education flamenco classes, accompanied by guitarist Roberto Rios. She was a performer with Roberto Rios’ “El Arte Flamenco” in Boston and currently performs with Yosi Karahashi’s “Flamenco for Life.”

Antonio “Tiriti” Tran has studied music since the age of 12 and has studied in Spain in Granada, Jerez, Sevilla, Malaga, and Alhaurin el Grande. He has worked with the group “Flamenco Boston” since 2009. He has also worked with modern dancers from the Boston Area and was featured in Dave Glista’s film, “Revealing Space.” Antonio has been featured regularly on television programs such as “The Steve Katsos Show,” and “All About the Arts.”

Bonnie Wong has studied flamenco for the past 12 years, learning from teachers in both Boston and New York.

Sandra Liu has been an aficionada of flamenco dance for over a decade who also found joy in flamenco cante in recent years. Based in central Mass, she’s very excited to join the Brookline Porchfest again!

Lenny Marcus teaches (not flamenco!) at the Harvard School of Public Health